154,475,935 records
This is a collection of church baptisms and civil births recorded in France from the earliest time of priests performing and documenting baptisms of newly born infants and later births recorded by civil registration officers. Baptism was usually performed on the day of birth or the following day. The indexed records include the name of the child, birth date, and birthplace. The images associated with these indexed records provide additional information on the child’s parents. These records are the vital birth records for France and of supreme genealogical importance in establishing child-to-parent relationships.

The recording of baptisms officially began in 1539 under an edict of François I. Following the recommendations of the Council of Trento, which concluded in 1563, and a canon issued by Pope Pius IV on 26 January 1564 parish priests were instructed to maintain written records of baptisms, giving the name of the child and parents (often only recording the mother’s given names) and the date of baptism. The canon of 1564 and another edict in 1579 became the main driving reform within the clergy to adopt these record keeping practices. In 1667 an additional reform under the ‘Code Louis’ required the mother’s full name be recorded and the record to be signed by the father and by the godparents. Starting in 1736 the child’s actual date of birth was to be included as well.

Civil registration of births was introduced in September 1792 and recording and maintaining the civil vital records became the responsibility of the local mayor who also acted as the Registrar (Officer de l’Etat Civil) – although this function was often delegated to another officer in the town hall. The Registrar was to be notified of births within three days. The civil births include the place, date, and time of registration; the child’s full name, the parents’ names (mother in her maiden name), ages, occupations, and domicile.

Few parish registers from before the mid-1600s have survived and coverage and completeness of this collection varies by department; records prior to 1700 are rare in this collection. 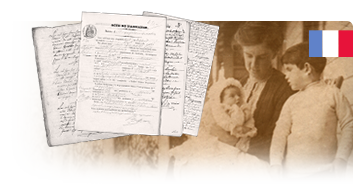